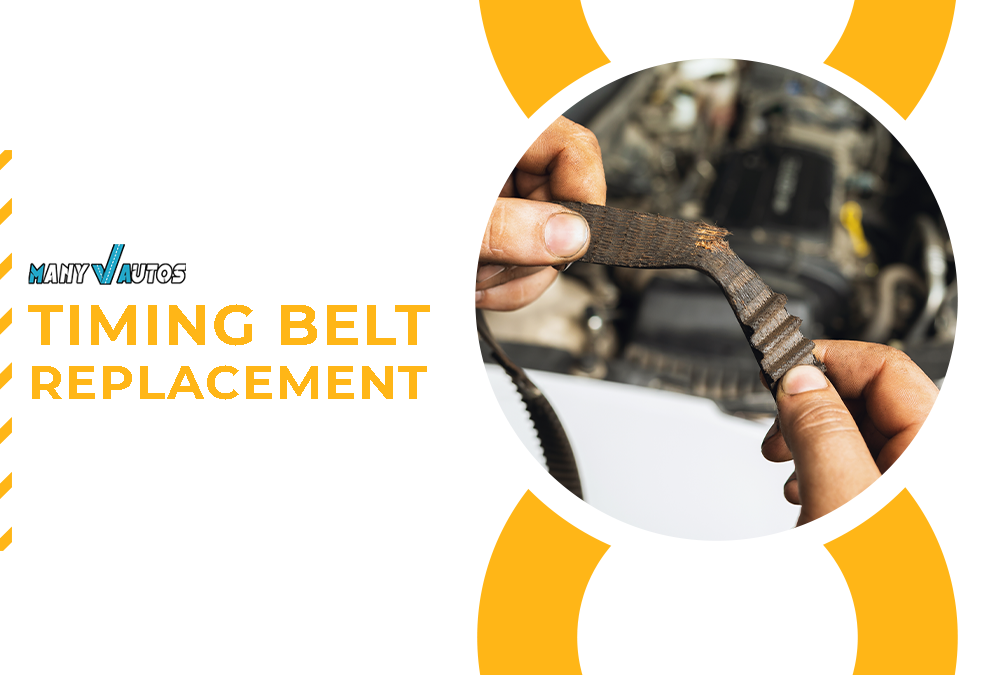 How Do You Check & Replace a Failing or Faulty Timing Belt?

A timing belt is an important internal engine component that connects the crankshaft and camshaft to ensure proper rotation and cylinder firing. Timing belts are made of tough, nylon-reinforced rubber cords that will last a long time.

Whatever material is used to make the timing belt, it will eventually wear out or break due to the incredible force that it links together, necessitating a timing belt replacement. Unless the timing belt is fully operational, your engine will not run properly. As a result, you should be aware of the warning signs of a faulty timing belt.

Every car does not have a timing belt. Timing belts are found on the majority of small cars and trucks with small engine compartments. Timing belts have predetermined replacement dates and should be replaced on time during a scheduled car service in Reading but there are signs that you need to replace your timing belt.

5 Symptoms of a Faulty Timing Belt

There are a few timing belt warning signs that indicate that you have a worn or broken timing belt and should replace it or consult with a car mechanic to replace it and also diagnose other internal components that are linked:

As previously explained, an engine's timing belt is connected to sprockets that drive the camshaft and crankshaft. The timing belt will undoubtedly fail as it wears out or ages. The engine may make a ticking noise. Remember that if your engine oil is low, you'll hear a ticking sound as those lifters lift. It's not like you're going to go out and buy a new timing belt as soon as you hear a ticking sound. It implies that you should investigate further. Keep an eye on your timing belt while inspecting it and avoid getting too close to it if it's moving. Because your vehicle's timing belt is a moving component, keep your distance when inspecting it if you hear ticking from the engine. If you're not sure, look for full car service near me online and have a trained car mechanic take a look.

You could inspect the timing belt if it appears to be worn out. The majority of engines have clear visual indicators. Simply look through the indicators when the engine is turned off. You'll be able to tell if the timing belt is worn out. Timing belts are made of tough rubber, but they wear out and must be replaced when looking for car service near me. If the belt appears worn, it is likely that it is no longer in use. If you do not want to be stranded on the side of the road, you must replace it.

Finally, the fifth sign is that you've exceeded the recommended mileage for replacing your timing belt - Check the recommended timing belt replacement date in your owner's manual. If you've missed the deadline, simply get the cash and replace it. Depending on the make and model of your vehicle, you may be able to replace the timing belt yourself if you know-how, or you may need to have it replaced by a trained technician.

How to Inspect a Car Timing Belt

The most important component to replace in your vehicle is the timing belt. We are all aware that timing is everything! Let's take a look at how to tell if your timing belt needs to be replaced. A good rule of thumb is to inspect it every 10,000 miles and replace it exactly as recommended by the manufacturer in your service manual, which is usually between 60,000 and 90,000 miles. The timing belt can be inspected in two ways. These are the following:

Inspection ports are built into some timing belt-powered vehicles. When you perform a visual inspection, it usually means that there is a small cover on the timing cover that you can easily remove without having to remove the entire timing cover. These covers are typically secured with two 100mm bolts. Remove the cover and the two bolts to inspect your timing belt. Check the timing belt for any cracks or missing teeth. A single missing tooth can severely damage an engine. Your timing belt should be inspected every 10,000 miles. The timing belt will also be rotated to see if it is too loose. Because if it is loose, it will cause a bad timing belt noise.

It will be a waste of time if you remove your engine to check your timing belt and find that it is still in good condition. So, the best way to avoid this is to inspect your timing belt with a timing gun. The gun can also be used to double-check your timing chain. Connect the timing gun terminals to the battery terminals to inspect your timing belt. The positive should be linked to the positive, and the negative should be linked to the negative. Then, connect the inductor sensor to the number one plug wire and turn on the engine. As a mechanic or do-it-yourselfer, use white paint to paint the timing mark on the pulley so that it can be easily read when the light is flashed. While the engine is running, flash the pulley light and rev the engine. If the mark remains in the same place, your timing belt or timing chain is still in good working order. If it jumps while you're flashing the light, this indicates that the timing belt is faulty.

Is it possible for me to change the timing belt on my own?

Timing belt replacement is best left to a qualified mechanic.

How long can a timing belt be expected to last?

This is entirely dependent on the timing belt you used when you replaced it the last time. Regardless of whether the mileage is covered, all timing belts should be replaced between 60,000 and 90,000 miles, or every 7 to 10 years. Regardless, we recommend consulting your service manual to determine when it is time to replace your timing belt.

How do I know when it's time to switch out my timing belt?

You will notice a few signs or symptoms when it is time to replace your timing belt. So, if you notice any of the following symptoms, you should have your timing belt inspected and replaced:

• Errors in the engine. It is important to note that your engine can misfire due to a variety of factors.

• You can hear a ticking sound in front of your car. Ticking sounds may be heard when your timing belt wears out.

When a bad timing belt starts to wear out in front of your car, it makes a ticking noise. If the belt eventually breaks while attempting to start the engine, it will make a whining noise. A whining noise indicates that the engine has no compression.